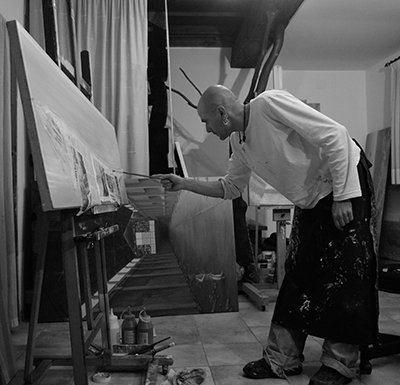 Txemi Novoa was born in Bilbao, Spain, in 1971, growing up in a city dominated by heavy industrial activity. His artistic expression was strongly conditioned by this environment, in which the economic crisis of the 1980's destroyed the steel industries, blast furnaces, and the infrastructure of rail and maritime transport, and left bank of the Nervión in ruins. Within this rugged environment, Txemi Novoa demonstrated a keen curiosity about the world of art at an early age. With only 11 years of age, he had already accumulated several awards, both local and regional. His dynamic personality, and incessant ambition to deepen his technical and theoretical knowledge, prepared him for a professional artistic career. Furthermore, Txemi developed visual projects and remained in constant collaboration with the different areas of the Faculty of Arts at the University of the Basque Country, where he obtained his Bachelor’s degree and graduated at the top of his class.

He has collaborated with the finest and most renowned Basque artists, participating in exhibitions with the likes of Augustin Ibarrola, Nestor Basterretxea, Ricardo Ugarte and Zugasti. Txemi was recently selected by Cai Guo-Quiang for the realization of an exhibition at the Guggenheim Museum in Bilbao. Txemi is in constant collaboration with the Basque government, for the creation of public monuments and art projects in Northern Spain.